The diet was based on natural goods during the Bronze Age. Most of the spices we use today were not known then, not even salt so food tasted different than today. Food was stored, cooked and served mainly from pottery and wooden dishes. Shards of pottery are common finds in archaeological excavations, but wooden objects don’t keep in the soil in Finland so we don’t know exactly how they looked during the Bronze Age. 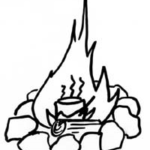 The clouds created a dark shadow over the sea. The clay which was found under the day side of the hill had been softened by the rain that had continued for days. Four children hovered around the purified clay pot. Small feet were good for trampling clay. A dark-haired woman walked along a path in the forest carrying a flat-bottomed clay vessel. Leinikka sat next to the woman. It was her time to learn the art of making pots. Mustikka was the best teacher one could find in these lands.

Mustikka took a handful of feldspar sand from her pot. I mixed the sand with the clay. That is how the pots stay better intact when they are burned in the stove. We rolled pieces of clay and shaped them into thin strips, kind of like clay belts. The pot kept growing bigger, layer after layer. We had to be very careful that the joints did not open. With her skilful hands Mustikka showed how to draw scratch decorations on the pot’s smooth surface. A shady place was found for the pots. There they could safely be left to dry for half a moon cycle. The leaves that were placed to cover the pots, however, needed to be watered every once in a while so that the pots would not dry up too fast and crack.

Small unsightly imprints had appeared in the surface of the pots. Those little scamps, when did they do that! Mustikka comforted that they do not matter at all. The pots were meant to be used and she had already seen pottery being decorated with cone heads across the bay. We placed the pots on top of hot stones in a pit bottom. Mustikka made a new fire to the edge of the pit and we gradually covered the pots entirely with burning wood. Intense heat made us to retreat further away from the stove and only Mustikka stayed to watch the fire.

I was sitting exited next to the stove. My new pot hummed on top of it. A smell of fish filled the house. Mother threw herbs to the concoction and continued to grind the barley grains. Hot stones warmed the water inside the pot. Dried fish was hanging from the ceiling. Pots full of dried berries were stored on the wall. The crop had been harvested. It is time to prepare the barley drink. I wake up from my thoughts. Ilmi is standing next to me hands full of flat disc stones and demands me to play with her. They look exactly like the flatbreads mother makes. We take a peek outside. The rain has stopped. We go outside. The air smells like autumn leaves.

There was plenty of fresh food available in the nature during the summer months. The problem has been how to store the food for the winter. The simplest way has been drying. It has been a suitable method for preserving berries, plants, meat and fish alike. Another ancient method has been fermenting. Fermented cabbage and fermented herring are still today popular food in Finland. Salt – a common preservative today – was not yet known in Early Metal Age. 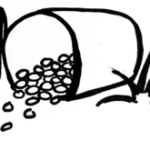 Food was prepared by cooking or by frying in paved stoves. Soot from burned food has remained in the surface of clay pots. Liquid was warmed by placing hot stones to a pot. The capacity of Iron Age dishes was about 1–2 litres. Clay pots were commonplace utility articles. They resemble flower vases. Pieces of coarse ceramics with scratched surface have been found in Huilu. Similar pottery has been also decorated with various stamps and marks resembling cat imprints. Cup-shaped pottery with glossy surface and possibly cup ears has also been found in Satakunta. They imitate metallic dishes and they have been used as food dishes as well as drinking dishes. Pots may have been made from wood birch bark as well.

Three small and flat disc stones whose edges are hit round have been found in the dwelling site of Huilu. Similar stones have bee discovered in  various other pre-historic dwelling sites as well. Their purpose and meaning remains unknown. It is suggested that they are somehow linked to religion or beliefs, but they could have been also chips for playing games, for example. Some have also guessed that they have been throwing stones or that they have been used to hunt water birds.