The sea was frozen. The forest is freezing cold. Foreign mariners would not navigate in the shores of Lappi before spring. Now Jousia has enough time to forge utensils from iron. He had learned that skill in foreign lands. Apparently he even spoke a few words of a foreign language. The coals were glowing red in the forge. An iron rod slowly transformed into a shaft in the hands of a skillful smith and soon a handle would be attached to the shaft. The glow of the iron faded away. It needed new life. Jousia placed it on top of the hot coals. The iron started to glow again and he moved it to the workbench for a while. A few more strokes and the blade would take the right shape.

I have seen how artifacts are casted from brass. Metal is expensive and the smith needs to master many phases before a new object would shine in his hands. Many animals need to be hunted in the winter forests and their skins collected in order to exchange a ring for Mustikka’s wrist. A sight of foreign sails in the sea got people moving. It was not always clear whether the tradesman came with good intentions or not. Jousia cautiously felt his ribs. There was a long scar, a reminder of a trial of strength with the men in the market place.

A curved sickle was finished. I took it in my hand. It looked similar to the one my brother got from a foreign man. Its sharpness would be tested during the harvest and its trade value would be evaluated in the spring. After a long day’s work a thought of porridge prepared by Mustikka made my mouth water. I closed the smithy’s door. A dog was barking behind the forest. I felt the snow under my feet and the sky was full of twinkling stars. 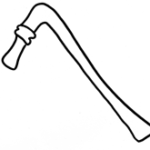 When tin or arsenic was added to copper, its resistance increased. This is how bronze, or brass, was created and it was a significant merchandise in the Bronze Age. Raw materials of bronze and artifacts casted from it have been carried over long distances across Europe and all the way to Asia. Finnish soil contains copper ore but people living in pre-historic times were not able to make use of it.

In Finland, artifacts made of bronze have been rare and to obtain them has required wealth and relations. Indeed, a bronze axe or dagger may have had many owners in various places before it has ended up here. Trade exchange has created complex networks. A foreign tradesman has been offered food and shelter. Trade relations were maintained by giving gifts. In addition to axes and daggers also arrowheads and swords have been made from bronze. Razors, tweezers and combs indicate that people in Bronze Age took care of their appearance.

In the turn of Bronze and Iron ages archaeological finds start to include iron which was more durable blade material than copper. Iron became a very popular raw material and bronze remained to be used only for making jewelry and clothing clips. Iron ore could be taken from the bottoms of Finland’s lakes and swamps. First it needed to be melted in order to separate the iron from the ore, and this was done in ovens with extremely high temperature which were specifically built for the purpose. The melting required large quantities of charcoal. Approximately 7–10 kg of iron was produced form 100 kg of iron ore. Plenty of slag has remained in the bottom of the ovens and some slag lumps have been found in the dwelling site of Huilu as well.