The sea was storming with whitecap waves. The rain whipped against the grey cliffs on the shore. Great sadness had faced the family. Death had taken away the chief’s wife. A difficult labor had been lasting for an entire day. Relief had been sought form the healer’s herbs and poultices. Prayers had been said to the gods and a sacrifice had been offered to the sea, but the gods did not relent. It was time to put the deceased to her last journey over the northern sea to the land of the dead.

Ancestral graves had been erected on the rocks, to the waterfront, under the sky and the sun. The rock cairns informed the mariners that these lands had been cleared and settled a long time ago by the large family of Saarno. A new grave would be erected as well below these burial cairns. Suitable rocks had already been collected from the surroundings. Plenty of rocks were needed.

When the rain stopped the body was laid to a pyre to be burned. The chief set the fire himself. A flame burst and the fire quickly spread to the pyre. The fire released the soul from the body for the journey to the afterlife. Little Ilmi was frightened by the sight. She could not understand how fire could help someone to sail over the sea.

When the last firebrand had burnt out and the embers had cooled down, the earthly remains of the deceased one were collected from the pyre. Only a part of the bones were placed on top of the cliff inside the rock circle. Each member of the family carried one stone to the grave. Ilmi had a red sand stone in her hands. Carefully she laid it amongst other stones. At the same time a ray of light peaked through the clouds. The gods were relented and the soul of the chief’s wife had reached her destination.

The oldest burial cairns in Sammallahdenmäki are located on top of a rock. The largest cairns are the “Long Ruin of Huilu” and the “Church Floor”. The former is 24 meters long and 8 meters wide while the latter’s size is 19×18 meters. However, most of the cairns are about 10 meters in diameter. In the Bronze Age these burial cairns were always at the seaside. Standing in a high ground they could be seen from afar and they also acted as landmarks for navigators and as signposts for other travelers. Younger graves were built lower downhill – today they can be found in the forests or next to the fields, as the coastline is further away now than it was back then due to ground elevation.

The importance of the land increased in the Bronze Age when human started to clear and modify the soil. Indeed, the burial cairns are seen to indicate the borders and extent of a family’s lands. The location of the graves at the seaside or along passage ways can also be related to beliefs of some sort of kingdom of the dead. The human world was surrounded by the sea of the world which needed to be crossed in order to reach the land of the dead.

The dead were cremated and often buried under piles of round or oval rocks. The quadrangular shape of the Church Floor in Sammallahdenmäki is unique and has no parallels in Scandinavia. The cairns include various kinds of stone circles and barriers as well as coffins built of large vertical stones. It has been suggested that their purpose was to prevent the dead from returning back to the land of the living. Burning the dead also released the soul from the body so that it could travel to the kingdom of the dead. If the body was not burnt, the soul could stay as a ghost amongst the living. 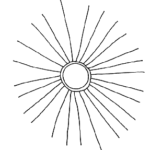 The bodies were burned somewhere else than in the mounds. The bones were collected from the funeral pyre and cleansed before they were placed in the grave. Each cremated body contains several kilograms of bones, but the graves often have only a part of the bones, sometimes just a few pieces. Only few artefacts were put to the graves to accompany the body – many graves have nothing at all. One cairn in Sammallahdenmäki contains a double-coffin made by erected stones. Burnt human bones and a fragment of a bronze bracelet were found in one of these coffins. The other coffin had no remains. It is possible that a non-cremated body was buried there – if the deceased had been cremated, the burnt bones would have been preserved. This grave belongs to the same era than the dwelling site of Huilu.

The gender of the bodies buried in the cairns of Sammallahdenmäki during the Bronze Age remains unidentified. It is also very difficult to tell the age of the body from burnt bones. However, it has been possible to identify the age from some of the bones and in all of these cases the dead has turned out to be an adult. Apparently only a part of the people living in Sammallahdenmäki in the Bronze Age was buried in the cairns – perhaps only the most important members of the family. The burial cairns were originally built for one person, but in time they were expanded and stone layers were thickened when the members of the same family were buried in the cairn as long as they lived in the same area. Therefore the cairns became memorial sites or cenotaphs for entire families.