The surface of the sea glittered in the sun. The punt quietly swung in the reed beds. The silence is broken when a stick-like hook (launi) splashes into the sea. A boy’s tanned hands hold tightly the other end of the fishing line. The hands neatly stick a roach to a stick and another trap finds its way to the water. The great grandpa is a skilled fisherman. The biggest pikes swim into his fish-trap in the spring. Flocks of migrating gooses during the spring and autumn meant busy times for hunters. Next autumn I would finally be allowed to join the hunting trips. The fish was not in the mood for eating. The punt kept swinging drowsily. Ohto slowly closed his eyes and fell asleep.

It snowed lightly. The sleigh felt heavy to pull. For once we were in luck. The trap path had many trapped rabbits. Squirrels shot with a bow swung uppermost in the sleigh. A dog would have been needed now to help us in getting all the prey back home. It would have also joined dad and uncle in moose-hunting. Now, far away, we could hear its shrill barking.

Something twitched in the end of the fishing line. Ohto quickly opens his eyes. The snow and the rabbit prey are gone. Away swims also a small pike with a hook in its mouth. Loud noises and barking could be heard coming from the seaside. The punt was pulled to shore. Two figures were walking up to the yard along the edge of a barley field.

Some years ago a small deciduous forest near the shore was pruned. The whole family took part in the work. Before that in the spring time, me and my sister had removed the bark from the linden trees. Good binding material could be found under the bark of the trees. Then, the forest was burned and barley seeds were sowed to the furrows which were full of black ash. In order to get a good harvest in the autumn we had to sacrifice to the gods. A good harvest meant tasteful flatbread and porridge.

Father had decided to clear a new field to the slash and burn plot. That was not easy. It took days to clear away stones and stumps. Great grandfather wondered such hustle – it surely was easier before with swidden fields. According to father the new field produced a better harvest. The neighbours had their own small barley field that had been produced using the slash and burn method. Father had moved the stones to a row in the edge of the field. Fencing was still needed in order to keep the pigs from rooting out the seeds in the spring. In the autumn we would find out whether there is use for father’s new iron sickle, as a foreign man had promised. He got many animal skins in return, and a proper feast.

In pre-historic times people got their livelihoods from hunting, fishing and gathering plants, but during the Iron Age animal husbandry and agriculture became more and more common. This is probably partly due to climate change – spruce forests became more dominant and the amount of mammals decreased in the forests. Also, the salinity of the Baltic Sea had started to decrease which resulted in a decrease in the number of big fishes in the sea. Seal populations declined at the same time as well. Therefore, people had to find new sources for livelihood.

Keeping domestic animals required hard work and care-taking, but it also ensured livelihoods for people. A shelter needed to be built and food needed to be gathered for the winter. During the summers the animals were able to saunter around the shore meadows and leafy forests eating hay and tree leafs. Signs of keeping goats or sheep have been found from most of the dwelling sites. Goats and sheep provided wool and skin as well as meat and milk. Also, they are durable animals and survive over the winter, even when the food supplies are scarce. In Satakunta, pig and cow bones have also been found from Early Metal Age dwelling sites.

There is evidence that people have raised pigs in Kivikylä’s Huilu. Those are the oldest pig bones found in continental Finland, older ones have been discovered only in Åland archipelago. Dogs were also domestic animals in the Bronze Age and they assisted in hunting and kept people company – much like they do today. Dogs were probably also used as beasts of burden.

We do not know exactly what kind of agriculture was practised in Lappi, because no pollen analysis has been done in the area. Pollen analysis could be used as a tool to find out when farming has started and whether the seeds have been planted to fields produced by slash and burn practises. Slash and burn farming is the oldest cultivation method – the vegetation is burned after cutting down the forest, and then the seeds are sowed in the soil which is fertilised by the ash. Swidden fields produced in deciduous forests provide 1-2 harvests, after which they were left to revert to forest. Young coppice was gathered from the growing forests as a winter feed for the animals, and young forests also attracted game animals such as moose.

Field cultivation requires clearing and modifying the land. The field has to be lain fallow from time to time so that the nutrients of the soil would return. If the field is fertilised it can produce harvest several years in a row. Pollen analyses have revealed that at least barley and wheat were grown in Finland during the Iron Age, and in the dwelling site of Huilu seeds of two different barley varieties have been found. Indeed, barley is the oldest known cereal grain in Finland. Hulless barley requires more fertilisation or a better soil than hulled barley in order to get a good harvest. A wheat seed has possibly also been discovered in Huilu. Wheat is more demanding than barley when it comes to growth conditions.

The proximity of the sea has also made fishing possible and fish has been a significant source of food for people. At least pikes and roaches have been fished in Huilu. Birds have been hunted for food as well – water birds moving in flocks could have been hunted with nets. Goose bones have also been found in Huilu but it is difficult to say whether they were wild or domesticated. Game animals in the forests could have been hunted with bows and arrows. The arrowheads were made from imported silicon and from quartz and quartzite which can be found in Finnish soil. They also may have been made from animal bones but those arrowheads have not been preserved in the acid soil. Hazel branches, for example, provided good material for arrow shafts. The hunters have probably used different kinds of traps and pitfalls which were checked every once in a while. To date there have been no game animal bones found in Huilu, but we know that people have hunted at least rabbits and beavers in Satakunta during Early Metal Age.

During the Early Metal Age human had to adapt to gradually cooling climate which changed the flora and fauna. Still, the temperature was in average 2-3 degrees warmer back then compared to what it is today. Diverse exploitation of the environment and creativity have helped people to survive in changing conditions. 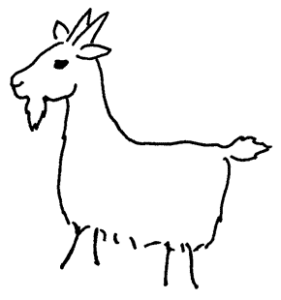 Barley is the oldest known grain in Finland.